On Saturday 21st July 2012 a willing band of volunteers, rustled up by Kelley Rushton of Lough Neagh Discovery Centre arrived at Craigavon for a hard days graft repairing some sections of the trails. Many thanks to Rich and Davey of Trailbadger.com for the photos below and their assistance in getting more volunteers for the day, as well as rolling up their own sleeves. 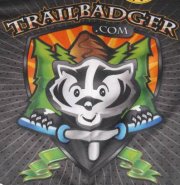 So here are some photos to prove how much can be done in such a little time - amazing work guys.

This first photo isn't actually the trail, but badly rutted ground to the left of the trail (the actual trail being hidden under the brambles to the right). 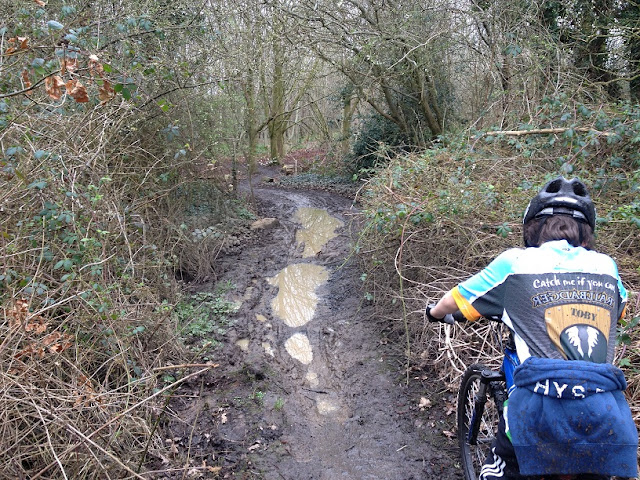 The next photo shows the same bit of trail, brambles removed, the muddy hole filled in and some good demarcation put in place. The existing trail also got a good light dressing of stone. 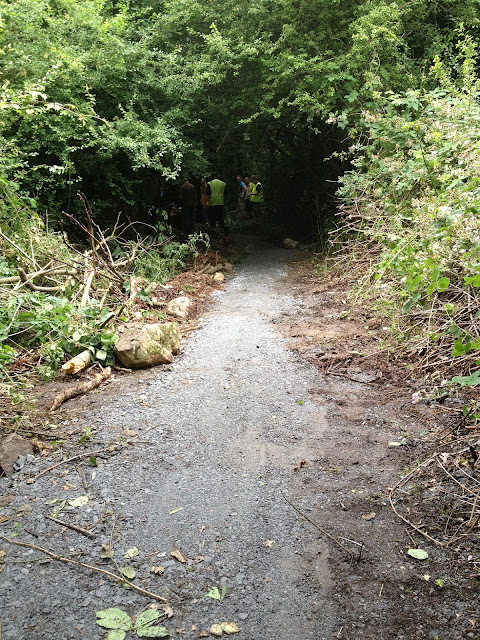 The next photo shows where riders have been taking short cuts to avoid a puddle and this has resulted in rutting and the retention of more water. 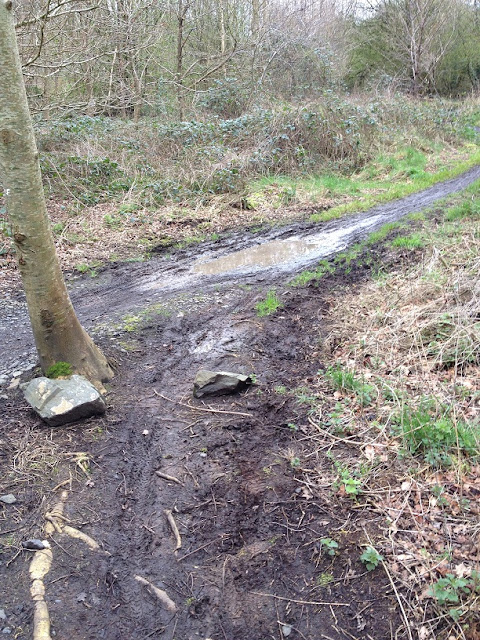 The guys in the photo below are busy working on the above section, concentrating on reprofiling the turn so it's a bit more insloped, surfacing and demarcating. 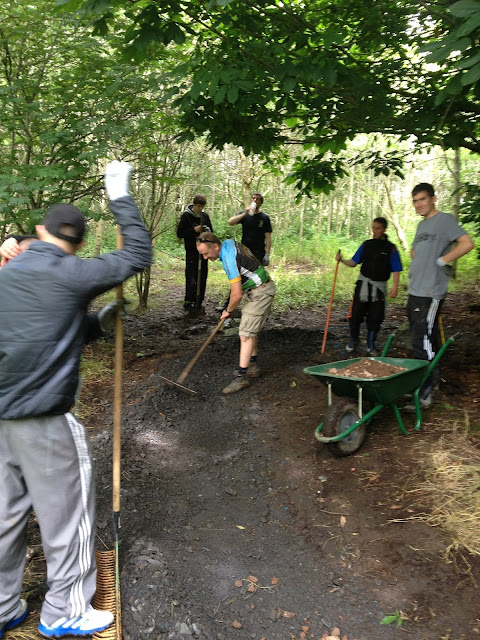 The next photo shows the guys whackering in sub base on the same section. 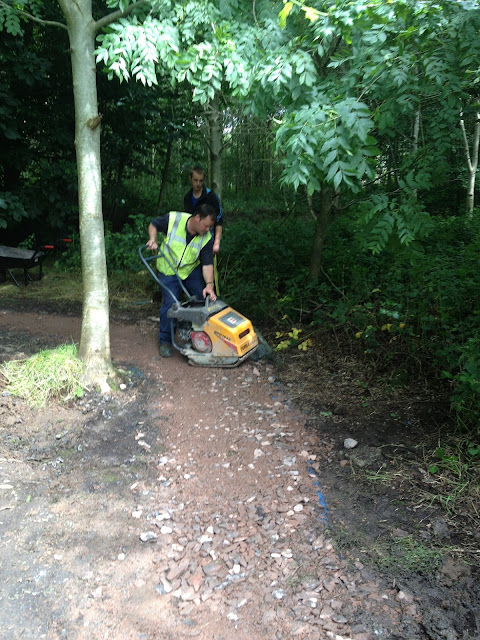 And the next shows them digging up the existing trail to reprofile. 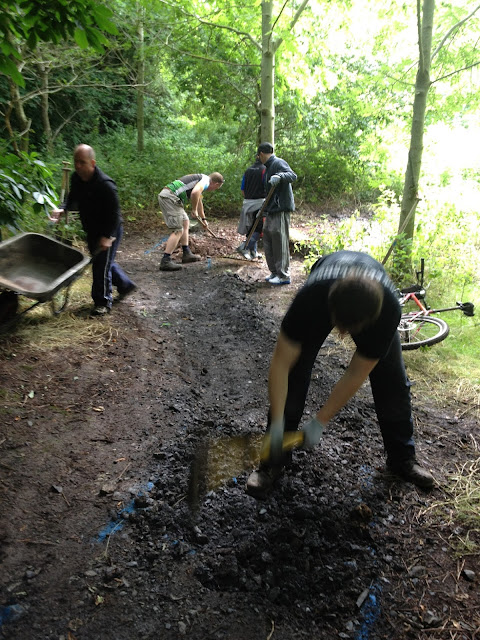 And here's the turn almost finished.... 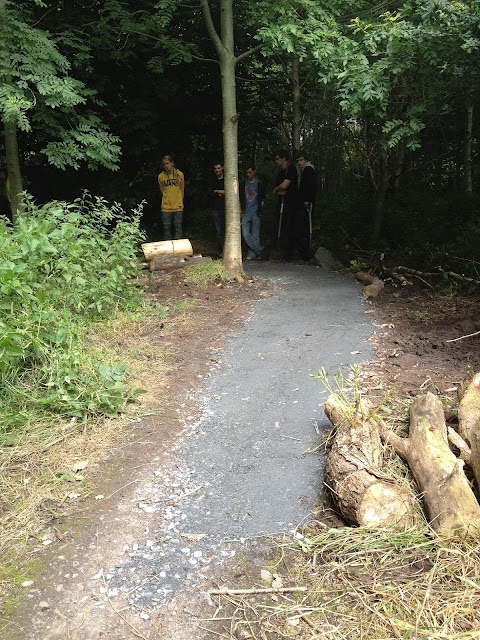 The next photo shows a badly rutted section of trail, where a lack of effective demarcation led to people riding on soft ground on either side of the hard trail surface. This led to rutting and eventually to the near collapse of the trail structure. 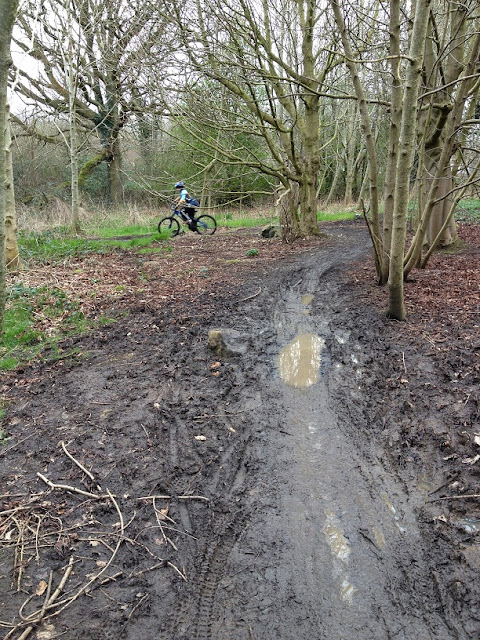 The next two photos show the above section repaired and with some really effective demarcation put in place to keep people on the hard trail surface. The important thing is that the demarcation be properly set into the ground and is landscaped to try and make it look as though it belongs there. 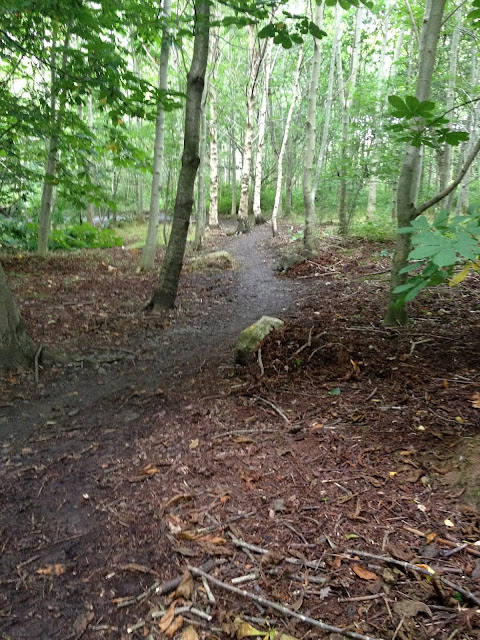 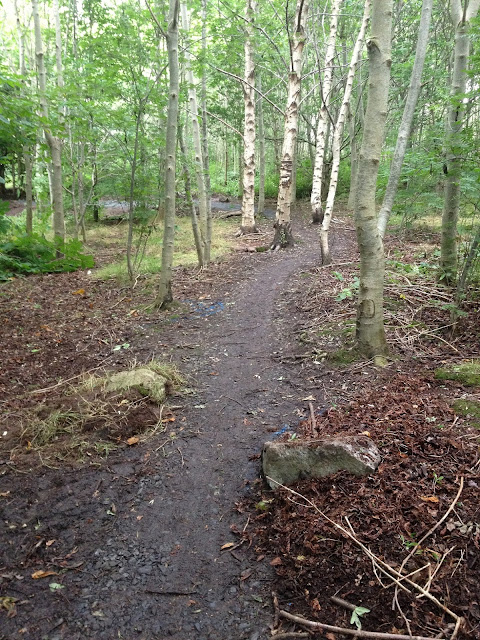 Well done to all the volunteers who turned up on the day and many thanks for all the effort.

The Craigavon trails are a great community asset, not just for mountain bikers but for walkers and runners alike and it's great to see these sections restored to their former glory.

Just found some pretty cool videos of the Ballyhoura MTB trails in the Republic of Ireland on Coillte land.

These trails were designed by Dafydd and this is the largest MTB trail network in Ireland, with over 50km of trails in a stacked loop system, with something for everyone.

Week 12 at Rostrevor and some sections are nearing completion. The pictures below show Section 3, which will be the first descending section on the big cross country loop after the long climb from Killbroney.

This section of trail crosses a steep slope through big trees with lots of step downs, rollable sections of stone pitching and grade reversals. The idea with this section was to have as little impact on the big trees as possible and to use the existing terrain and features to create a fun descent. 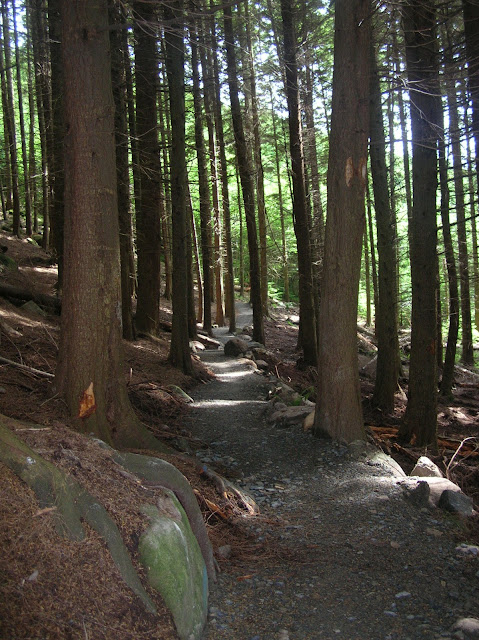 The above picture shows a bit towards the bottom of Section 3 - I think it looks great and after a bit of needle fall, will look and feel pretty natural. 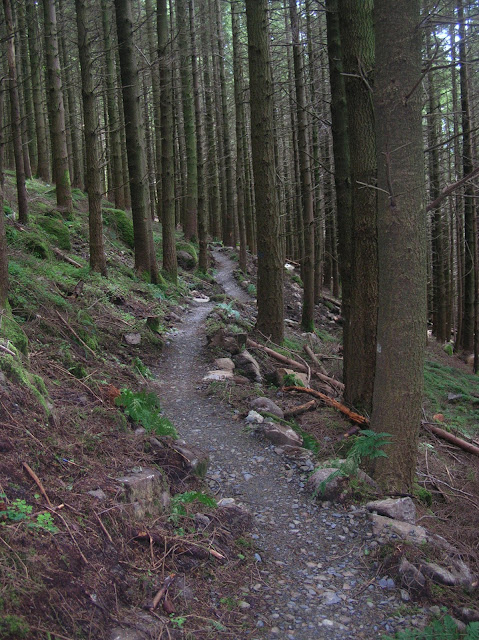 You can't really tell from this picture, but this actually descends at about 10% and there are loads of funky grade reversals and step downs - I'm pretty pleased with how this section fits into the landscape here. 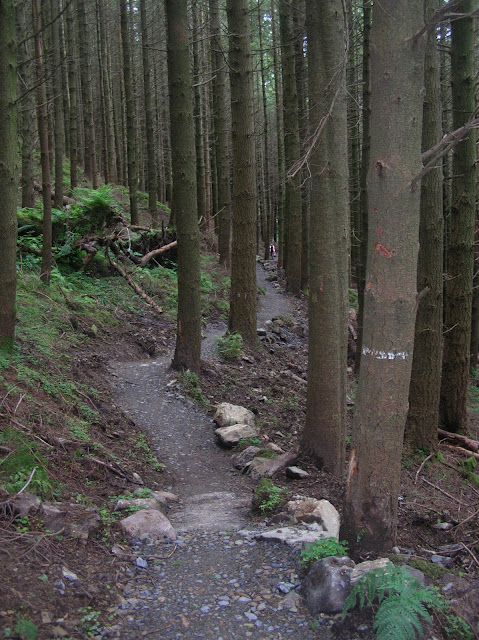 The same bit again, check out how the trail uses the trees to demarcate the turns. 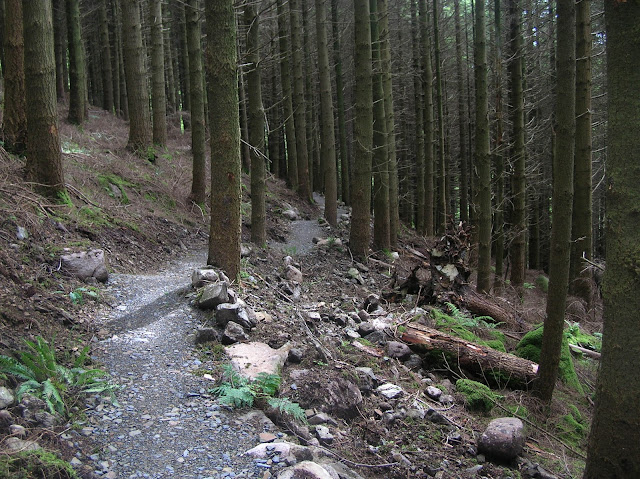 Again, it's quite difficult to see form the picture, but this one shows some of the grade reversals that characterise this section.


The way that the trails look in Rostrevor and how they sit in the landscape is no happy accident - rather, this is a result of a very lengthy planning and design process which took into account a lot of different issues and concerns raised by all kinds of stakeholders. The trail planning needed to take into account minimising the impact of trails on forest services' ability to carry out commercial forestry operations, whilst also making sure that the trails themselves were sustainable in the widest possible sense.


Consultation with local residents, recreational users groups and crucially, the local mountain biking community helped develop a clear frame of reference that has guided and informed the planning and design of these trails from the start.


Lots of people love Rostrevor Forest, and it's an important local recreation and tourism asset, where people come to run, walk, ride a horse, ride a mountain bike or just have a picnic. It was very important that the development of mountain bike trails did nothing to devalue the place or undermine its importance to the local community.


With all of this in mind the planning and design of the trails system has centered on minimising the visual and physical impacts of the trails and giving them a naturalistic feel in the hope that this will connect mountain bikers to this beautiful and very special landscape for years to come.


The time spent establishing definitive trail lines and developing very detailed prescriptive plans has enabled Euroservices to fairly and accurately price the trail construction work and for us to monitor and measure the work in a robust way.

A couple more pictures from Rostrevor ....watch out for next weeks blog, which will include some pictures of Section 3, a more featured, funky section than those shown previously, with some discussion about the trail planning and design work that went into the project. 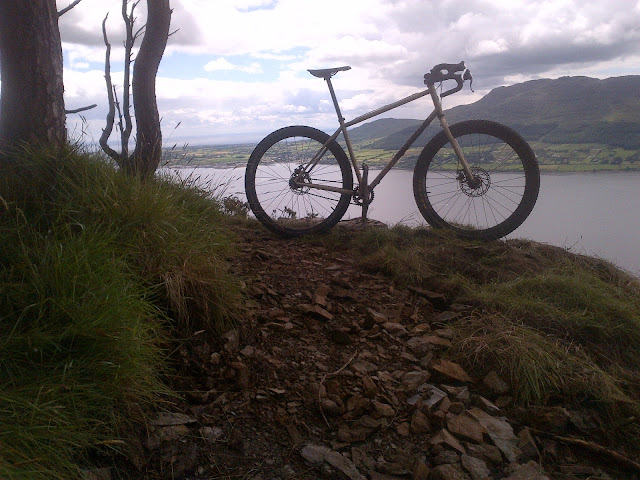 The above picture shows the turn at the top of Section 5 on the climb up to Slieve Martin.

This is a superb viewpoint out over Carlingford Lough 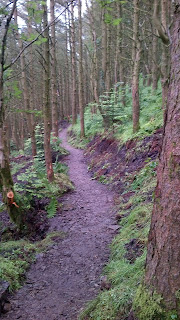 Above is a photo of Section 5, where it climbs across a very steep hillside through big trees - the Euroservices guys have done an amazing job with this, with very little impact on either the ground or the trees.
No comments:

Dafydd has recently spent three weeks over in Western Australia (no...not on holiday, unfortunately for him!!)


See the link below (about half way down the page) to see what WAMBA had to say about Dafydd's presentation: 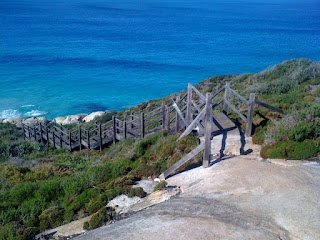 Beautiful blue sea of Perth - Dafydd was staying in a hotel just around the corner from here :-) 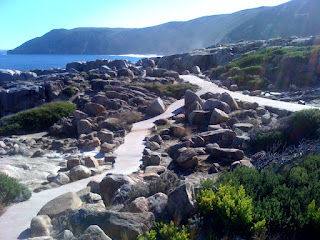 For the rest of the time Dafydd sent in WA he was liaising with land owners/managers, statutory bodies, native heritage groups and stakeholders to develop a sustainability framework that will be used by DEC (Department of Environment and Conservation), DSR (Department of Sports and Recreation), West Cycle and WA Mountain Bike Association during the planning and design of any new trails. The first draft of this document is currently being circulated among the groups above and I'm sure there are future trips to Aus on the cards for Dafydd - lucky guy ;-)

Link to West Cycle - Developing a Sustainability Framework
No comments: 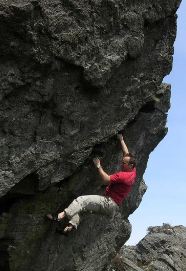 I'm Dafydd Davis, a trail planner, trail designer and advocate of the sustainable trails model for outdoor recreation. First and foremost, though, I'm an outdoor person, a mountain biker, climber, fell runner and walker. I've an enduring love of the landscape- and it's that which informs my work.
Here I'll be highlighting recent projects, ideas, interests and news from my business, Trails by Dafydd Davis.